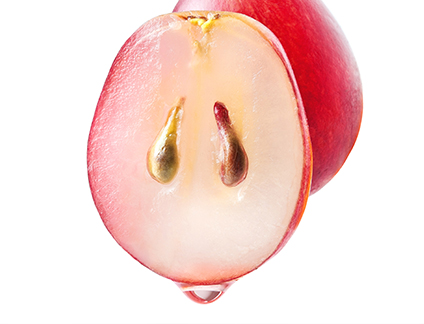 As part of the wider concept of a circular economy, promoting co-products, or upcycling, opens up new possibilities for agri-food production. Elements that were not previously used - like fruit skins and stones or flower petals – have become precious materials for new plant sub-sectors. This approach reinforces the link between nutrition and beauty. And, is also the source of the unique sustainable actives at the heart of our portfolio.

From leftovers to noble materials

The word upcycling appeared for the first time in 1994. In an interview, German engineer Reiner Pilz criticized the notion of recycling as a form of “downcycling” that involved destroying objects in order to transform them. Instead, he recommended upcycling, whereby “old” products gain value rather than losing it. Today, it has become a watchword in ecology and the leading principle behind many innovation strategies. At Inter Actifs, we have been privileging this approach with our suppliers for several years now.

For example, the pomegranate bark extract in the Inter Botanics collection is produced from fruit that is too small or squashed to be sold, but is still packed with polyphenols. The fruit is harvested using traditional methods at the foot of the Atlas Mountains in Morocco. The extract is obtained from the bark as total polyphenols with a specific, standardized process. The antioxidant properties are ideal for preserving the skin’s radiance and protecting hair color.

Another example is Eco Scrub Murumuru, a natural exfoliator derived from the upcycled leftovers of Brazilian Murumuru butter production. This biodegradable power has a gentle exfoliating effect, while also benefiting from the emollient properties of the original butter.

Nestled in the volcanic landscapes of Etna in Sicily, Bionap specializes in upcycling as part of an advanced sustainable development strategy. The company focuses on organic cultivation, short-circuit production (2 hours from plantation to factory) and eco-responsible processes (75% renewable energy).

The result? Opuntia Biocomplex SH is an anti-aging complex rich in polysaccharides extracted from the tender young pads of the prickly pear.  Traditionally removed during “scozzolatura” to allow bigger fruit to grow, they have become the raw natural resource for an active ingredient that is an alternative to hyaluronic acid.

Renegrape is obtained by separating the sugar and organic acids in grape must. 38-42% standardized in organic acids (tartaric, malic, lactic, citric and gluconic), it is a 100% plant-based skin-peeling agent that offers soft, efficient results. Its activity has been compared to that of glycolic and mandelic acid.

Flavoslim is a co-product from the production of essential bergamot oil and juice extract. The lipolytic effect of this slimming active titrated in flavonoids (8-10%) has been demonstrated on adipocytes cells. Further clinical testing (arms, hips, buttocks and thighs) at 1.5% have shown that, from 14 days, the active helps activate micro-circulation, improve the appearance of the skin (tonicity, elasticity and cellulite) and reduce the thickness of the adipose tissue.

In Japan, Technoble’s laboratories focused their attention on flowers used in the food industry whose petals are usually thrown away. They realized that saffron petals – the spice only uses the stamens – are extraordinarily rich in kaempferol-3-O-sophoroside.  Choosing an exceptional saffron variety grown in Japan, Technoble developed an anti-inflammatory active ingredient for anti-aging: ReSaffron DC.

At the crossroads between upcycling and fermentology, they also developed Bijyo Haku, a sake lee extract. Rich in amino acids and glucosylceramides, it increases the expression of filaggrin and the quantity of amino acids of the NMF. At 2%, it enhances hydration from the first application, improves the barrier function of depilated skin after two day, and reduces the appearance of dehydration wrinkles after 15 days.