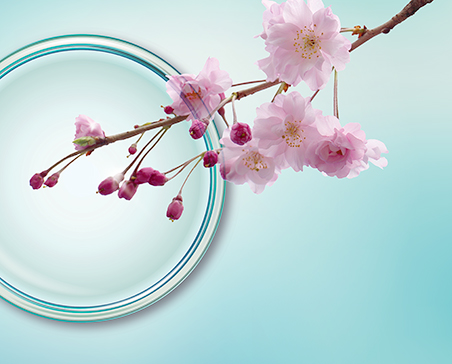 Fueled by new food trends and inspiration from Asia, fermentology is generating more and more interest in the world of cosmetics. It brings together and enhances all the promises of the natural world: unique compounds of natural origin, greater bio-affinity, better environmental performance, reconnection with millennial traditions and products developed relying on life intelligence. For all these reasons, in recent years, Inter Actifs has decided to make this a development priority with the potential to accelerate the ecological transition of the cosmetics industry.

It all began with the tradition of fermenting rice and, at the crossroads of upcycling and fermentology, the use of sake saku or sake lee (by-product of sake fermentation) in cooking. The Technoble laboratories studied its cosmetic properties and elaborated two original anti-aging ingredients.

Bijyo Haku is an active ingredient rich in amino acids and glucosylceramides. In-vivo tests have shown that, used at 2%, it increases the expression of filaggrine and the quantity of amino acids of the NMF.

Oubisei is an original extract of Sakura Flowers associated with a sake lee extract fermented with a rare yeast from the same flower.  It promotes cell renewal via the stimulation of collagen XVII. Recent studies have shown this form of collagen plays an essential role in enhancing base cell functions and in maintaining a normal skin turnover.

The tradition of fermentation in Korea goes back to as early as the 4th century AD. Detailed techniques can be found in the Samkukjiwijidongijeon (Records of the Three Kingdoms).  Today, fermented foods are still much praised for their unique taste and outstanding health benefits.  The application of fermentology to personal care was therefore a logical step and the starting point of the prominent K-Beauty movement.

Our partner, Labio is dedicated to developing fermented ingredients. Their products range from functional ingredients to advanced actives.

Fermentoils are a new generation of vegetable oils transformed by an exclusive fermentation process. They offer a higher concentration of free fatty acids and MEL, as well as increased tocopherol activity. Their enhanced composition results in a enhanced sensory profile and improved moisturizing properties. For use in aqueous systems, they are now also available in liposomes (Aquaferm).

Ginbalance is an extract of ginger obtained from the entire plant (roots, stem and leaves). Fermentation increases the concentration of the active ingredients, while reducing their molecular weight for enhanced bioavailability. Ginbalance reinforces the skin’s defense system through an anti-inflammatory action (COX and INOS pathways) and antioxidant protection. Clinical studies have confirmed its benefits in reducing water loss and generating an anti-irritant action.

Coolin GL was developed from a Finnish fungus that is rich in Grifoline, Albatrellus confluens. Fermentation significantly increases the concentration of this molecule, which is known to modulate TRPV-1 receptors.  Coolin has been evaluated in relation to the harmful effects of inflammation: protecting from free radicals, modulating the inflammatory cascade (IL6 and Cox 2), regulating TRPV1, inhibiting the influx of Ca2+ ions and reducing MMP-1.  But, Labio also evaluated its thermo-regulatory properties in vitro. Used at 5%, it reduces the skin’s temperature by 2.6° on average, from the first application.

Organic cereals   Although fermentation is closely linked to traditions in Asia, it is also present in some European customs. Created in 2000, Woresan is a family-run company that has developed patented fermentation technology for acidifying cereal flour. Favoring short-circuit production in Northern Germany and crops from organic agriculture, the Woresana® range comprises 3 fermented extracts (rye, amaranth and buckwheat) that are rich in vitamins and amino acids. Fermentation improves their affinity with the skin and optimizes their efficacy (soothing, anti-acne and anti-dandruff actions). Woresana Rye, in particular, has been tested on S. epidermis and Malassezia furfur.