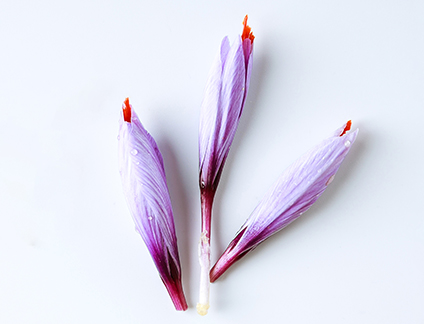 As our understanding of the aging process deepens, it is clear that the inflammatory cascade is at the origin of irregularities on the skin’s surface. This means that helping the skin respond to “aggressions” is of strategic importance. Technoble’s laboratories took up the challenge with a solution that combines an original scientific approach, precious plant and upcycling process.

Natural solutions are increasingly important. However, growing pressure and scarcity highlight the importance of developing more responsible processes that valorise the full potential of these raw materials. This is why, for the last few years, Inter Actifs has promoted initiatives from partners who develop co-products and discover new sources of high-potential phyto-molecules. This is the exact aim of the Re:Derma&Earth program from Technoble. Re-Saffron, a Japanese saffron flower extract, is one of the most recent developments.

Originally growing in Iran and Morocco, saffron reached its full perfection in Japan. The plant was introduced in the 19th century and acclimatised through an original cultivation method inspired by silkworm breeding. In the country of the rising sun, far from the heat of the Middle East and parts of Asia, the Taketa region perfected the growing process in dark rooms where the flower was naturally nourished by ambient humidity. The plants therefore developed a higher level of crocin than elsewhere, making this variety one of the rarest and most precious.

We use the saffron stamen to produce the precious spice known as red gold. When studying the process, Technoble realised that the actual flower, a co-product, was left used. On analysing the flower, they discovered that it contains 30X more kaempferol-3-O-sophoroside than the stamen. A titrated extract was developed from the upcycled flower and its anti-inflammatory properties studied in relation to anti-aging.

We know that the HMGB1 (high–mobility group box 1) protein is involved at a very early stage in triggering an inflammatory response. It activates NF-KB and increases the expression of the intercellular adhesion molecule (ICAM-1). HMGB1 was therefore chosen as the target for this active ingredient.

In-vitro tests demonstrated that Re-Saffron inhibits the synthesis of HMGB1 and ICAM-1 after exposure to UVB rays.

Permeation tests also confirmed the efficacy of ReSaffron DC on the skin.

Further clinical studies highlighted the efficacity of the extract (2%) on inflammation induced by a surfactant: ReSaffron DC reinforces the skin’s natural resistance to inflammatory stress and helps prevent the effects of inflammaging.