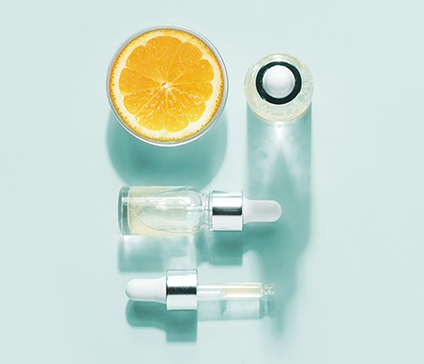 Evolving desires and expectations encourage us to think up new beauty formulas. We strive to create compositions that are elegant (minimalist and highly efficient) and show high affinity with the skin (simple, familiar, transparent ingredients). In this context, vitamin C seems to be an ideal choice. But its instability makes it difficult to tame. Exploring the concept of cellular desirability, Barnet has transformed this challenge into an opportunity.

Skin cells have specific receptors for antioxidant compounds the body finds particularly “desirable”. Present in both fibroblasts and keratinocytes, OCTN-1 is a natural transporter of ergothioneine (EGT). This amino acid with remarkable antioxidant properties lies at the heart of IntenCfy, the new active ingredient from Barnet.

Based on the idea that EGT is just as “desirable” to cells as vitamin C, Barnet explored the advantages of combining the two. Formulated and confirmed through in-vitro testing, this hypothesis was based on IntenCfy’s capacity to recycle oxidated vitamin C and increase the amount of active vitamin C in the cell, even under oxidative stress. Together, they form powerful duo that revitalizes and protects cells using compounds with high affinity.

Further testing revealed this synergy’s capacity to increase collagen I and III synthesis.

More recently, studies have also shown that the inhibitory effect of vitamin C on melanogenesis doubles in the presence of EGT.

The benefits don’t stop there. EGT has also revealed a wide range of protective functions including inhibiting oxidation, protecting mitochondria, preserving DNA integrity under UVA rays and reducing MMP-1, as well as acting as an anti-pollution, anti-ozone shield.